Installed quilt an hour ago, pasted in all my curseforge mods (a somewhat-custom fabric modpack derived from “better minecraft v6”), cleaned up some stuff from 2 years ago, and fixed a couple errors that sprang up, but now I’m stuck with a particular error I can’t figure out how to resolve (crash log attached below).

I’m not using a modloader, just the “raw files” of the appdata/roaming/.minecraft folder; I ported over the fabric libraries that were in the .twitch minecraft files (as that’s where it’s pointing to, “net/fabricmc/loader/impl/entrypoint/entrypointutils”), yet the issue remains.

No clue what it could be; I already went through all the troubleshooting steps I could think of, and google, the rest of the support forum here, and a global search of the quilt discord server (though the NoClassDefFoundError was mentioned, the specific logs themselves were different) doesn’t have a solution either. I joined the discord an hour ago to try to get help there, but there’s a whole ass application that still needs to get accepted lol, so I had to make an account here; hopefully y’all can help where discord can’t atm! 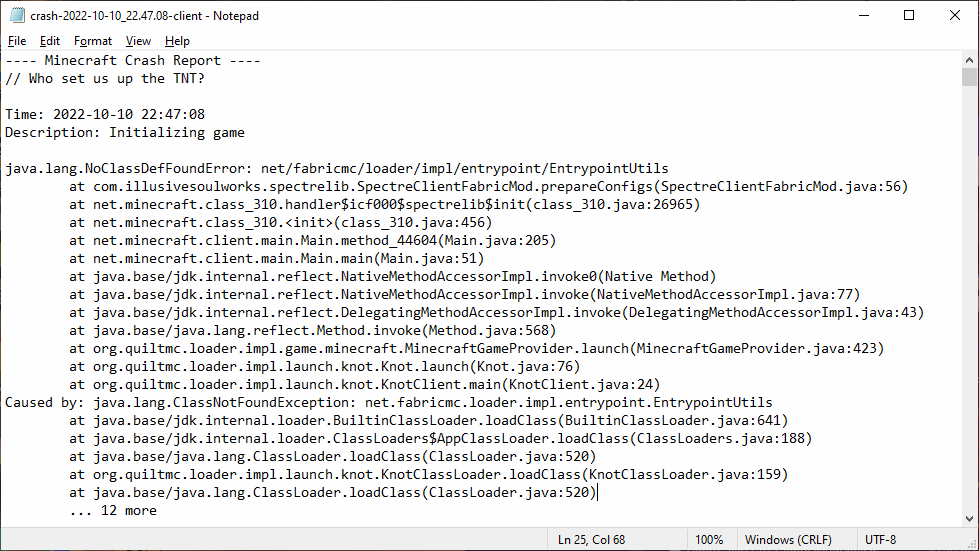 Looks to me like spectrelib is making use of Fabric loader internals, which aren’t meant to be used by any mod if it’s at all avoidable — which is why Quilt doesn’t include them.

Any idea what mod is using it?

Before I made the post, I thought the “spectre lib” thing was weird, so I looked it up and the mod “comforts” was a primary google result; removing that mod didn’t fix it though, and I have zero clue what mods use what would be using what libraries (other than for some I’ve installed manually, like “collective” (by Serilum)).

I have a ~250 mod large modpack that I ported over from my curseforge, so if there’s any way to figure this out that doesn’t involve manually checking them one by one (and even then, I’d need an explanation for how to do that cuz I’ve never had to look at library dependencies before) I’d appreciate to hear about that method, haha.

Well, first of all, did you check whether you don’t just have that library installed on its own?

Second of all, it might be worth checking whether you have other mods installed that are part of illusivesoulworks - I can’t find the source for the library itself, though.

yeah I also checked that I didn’t have the library installed lol, good question though.

And, thanks for that link; I did have a fewothers installed from that: namely, comforts (already removed), cherished worlds, elytra slot, and vein mining.

I’ll have to get back to you tomorrow on whether it fixed things for sure though, I have to log off for the night.

It should be fairly simple for us to add the internal class to make this work - I’ll push an update to quilt-loader soonish.

Forgot to respond yesterday; after removing the illusivesoulworks stuff (along with a few other problem things that came up (charm, charmonium, decorative blocks, and lithium)) things all got working. Thanks!