This is a beginner’s guide to maximizing your client-side performance on Quilt. You probably already know a good amount of the stuff in here – but this is meant to be a reference guide for others who don’t.

If your frames per second (FPS) is lower than you want it to be, I can help.

Even if your system is unable to get a full 60 FPS, you can still get pretty close with these changes/additions! To see what they did to a test system of mine, open the spoiler.

(tl;dr of "Frame Tests: these optimisations made my framerate go from 50 to 110.)

Well, the answer is that everything is in the settings that you use, and what you have installed. Remember: the hardware in these tests did not change at all; only the settings and the software.

One of the things that Minecraft (and Java applications in general) relies on is memory. This is where everything that the game is using right now is stored.

Minecraft generally runs better if you give it more memory (not always but usually). The amount of memory you can use is completely dependent upon how much physical memory is in your system.

To figure out how much memory your system has:

This will generally be about 4 to 16GB, depending on your system, but can be higher or lower.

I recommend using 1 to 4GB of memory. If you have more than 8GB, allocate 4GB, and if you have less than 8GB, take your memory amount and half it. Do not allocate more memory than you have physically in your system.

To allocate this amount of memory to Minecraft, go into your game instance’s “JVM Arguments”. This varies depending on your launcher, but for the default launcher is in your instance’s settings. The first two flags have the following arguments:

Xmx is your maximum memory allocated to Minecraft, and your minimum memory is Xms. Modify the maximum (first flag) to have what you calculated earlier; e.g., I would use “-Xmx4G”.

As for the minimum (second flag), you can set this anywhere between half of your maximum to the maximum (e.g. I could use “-Xmx2G”).

Once that’s saved, you now have more memory than you would by default! To ensure that you’ve configured it correctly, start up Minecraft and press Alt + Shift + F3. This will bring up a menu that’s more detailed than normal F3. In the top-right, it should say something along these lines:

If you haven’t already, you should install the Quilt Loader. You can see instructions on how to do that in the official guide.

The next step is to install performance-enhancing mods. Personally, the ones I recommend the most are Sodium, Lithium, Starlight, FerriteCore, and EBE. These five mods all target certain aspects of the game and optimise them. Place those into your mods folder.

Are you using OptiFine? See why you shouldn’t.

The third step to optimising your Minecraft: change around your in-game settings!

All of your progress is going to be for nothing if your render distance is 32 and your biome blend is 9.

My personal recommendation is to lower the settings that impact performance to the lowest they can go, and gradually increase them one-by-one and see how they affect your FPS.

As for VSync and FPS Limit: I personally recommend turning off VSync, and turning on FPS limit, to whatever your monitor’s refresh rate is (usually 60 Hz [FPS]). This allows your FPS to reach its highest potential, without hogging up all your computer’s resources.

Turn VSync back on only if you’re having issues with screen tearing.

This one seems obvious, but it needs a mention. If you’re still having issues, you might have some unnecessary applications running in the background. Try opening Task Manager / System Monitor and closing apps that take up a lot of memory and CPU usage.

Just be careful not to close things that are integral to your system running! (cough cough don’t end System, kernel_task, systemd, etc., I’ve made those mistakes before so that you don’t have to

It also may be worthwhile, if your computer is the lowest of the low, to switch to a whole other operating system entirely. Windows isn’t known for being the most resource-efficient, so either run Windows10Debloater, or maybe even put a bit of research into Linux and find a distro that works for you (I recommend Pop!_OS for beginners).

You’re now complete! Share how much your FPS increased by replying below, I’d love to see if/how much this guide has helped!

Is starlight better than phosphor? I’ve always used phosphor personally because I heard starlight was unstable

Starlight is definitely far more efficient than Phosphor, as evidenced by this image (there are others on GitHub) 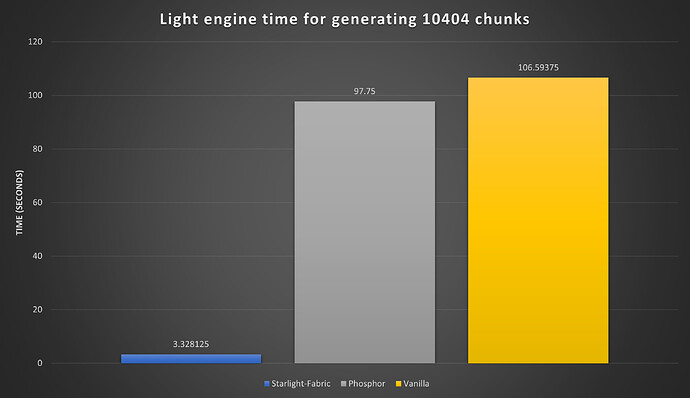 Starlight is less conservative than Phosphor, since it rips out the entire lighting engine and reimplements it, but I haven’t experienced any vanilla parity issues myself.

May I suggest that you add a command for finding out RAM on linux? It’s cat /proc/meminfo | grep MemTotal